I generally consume at least 150g protein per day, as per the maintenance macros on my diet template. That can mean a lot of chicken if I’m feeling lazy. However, variety is the spice of life, so I try and break it up with other high protein foods. Here are 5 ‘high protein’ labelled foods that I’ve tried recently (so that you don’t have to)…

Now, I love peanut butter. I love it smooth, I love it crunchy. I love the cheap peanut butter that’s full of sugar and salt with extra oils, and the wholesome “natural” stuff that is literally just peanuts whizzed up. I bloody especially love Reese’s Peanut Butter cups, preferably by the kilo. Unfortunately, I also know that PB is FAT-TASTIC, and too much of it and I’m soon the size of a small house. So you can imagine my delight when I spotted this “de-fatted” peanut powder from Peanut Hottie (their website is terrible, FYI) during my weekly shop.

Cracking it open, the tub smells delicious, but at the recommended serving size there’s a barely perceptible taste. On one hand, this makes me sad, but on the other hand this does mean that you can boost the protein content of foods without having to worry too much about altering the flavour. I’ve tried it in yoghurt (Skyr, see below), hot chocolate, a coffee (don’t ask), porridge and broccoli soup. It worked best in the porridge and hot chocolate.

However, despite my enthusiasm, it didn’t take long to realise that this magical de-fatted peanut powder is literally just peanut flour with sugar & salt added. I can buy peanut flour slightly cheaper in bulk on the Internet, control the addition of salt/sugar and achieve the same protein boost for less cost. Peanut Hottie is £3.60 for 180g, with 45g protein per 100g, so the highest protein content of the foods covered today; no surprise there.

Would I buy it again? Probably not.

I first purchased a UFIT Iced Latte during a post-gym shop, which I hurried round so that I could get home and showered before a meeting (nothing like cramming ALL THE THINGS into a day). I’m not typically a fan of iced coffee, or indeed milk, but this was surprisingly tasty. There wasn’t any gritty texture or lumpy unpleasantness as found in some protein shakes, and although it is best served chilled it’s perfectly palatable when you forget to refrigerate it too. Ask me how I know.

All of the protein (7.2g protein per 100ml, 22g in one shake) comes from milk and added milk proteins, so it’s no good for the vegans among you. It contains no added sugar, although obviously contain milk sugars which add up to some 13g of carbs per bottle. It does contain sweetener, but I can’t really taste it over the coffee of which there’s a generous amount of actual Arabica to give a caffeine boost (rather than just flavourings).

I was so impressed with the UFIT drinks that I now buy it in bulk and drink it on the go where a typical packed lunch would be inconvenient. 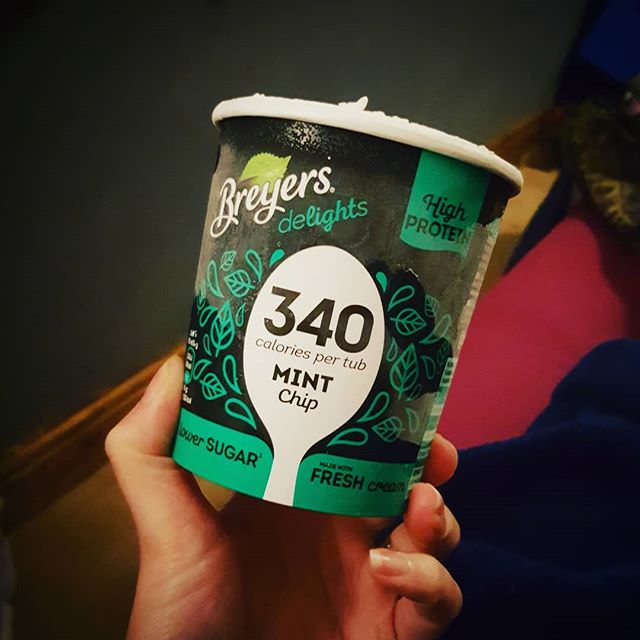 I bought this earlier on this year, wanting an ice cream fix but without the calories. It was foul. It tastes like someone has squeezed an entire tube of toothpaste into an ice cream tub, bulked with artificial sweeteners, and mixed in vaguely chocolate-flavoured chunks of hardness. And it’s not even that high in protein. I don’t know if all of the Breyers low cal ice creams have the same problem (by virtue of using sweeteners to lower the calorie count) but this one should definitely be avoided.

These ice creams (if you can call them that) are around £3 when on offer, with 20g protein in one tub. However, a tub of Ben And Jerry’s Minter Wonderland is around 20g protein, so the benefit here to the Breyers is the low calorie count rather than the actual protein. Don’t be sucked in by the marketing!

Would I buy it again? Not a chance.

It’s pasta. It looks, cooks and tastes like pasta. Which is what you want, I guess? There’s nothing exciting to be said about the high protein fusilli. It does have over twice the protein of regular fusilli, but at over three times the cost. Nifty if not short of money and need a little boost to your macros, maybe for vegans who need to boost their intake, but not something I’d buy regularly as it’d blow my carb macros out trying to reach 25g protein per meal.

Would I buy it again? Probably not.

Arla Skyr — not to be confused with Arla PROTEIN yoghurt, which tastes like butts — is available in several flavours and is universally pretty delicious. 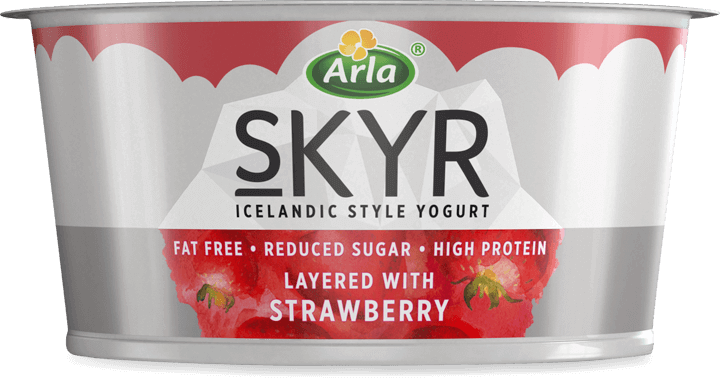 Skyr is a dairy product, Icelandic in origin, is naturally high in protein and low in fat and sugars. It’s basically a strained, fermented cheese according to the Wikipedia article, but is universally regarded as a yoghurt by people who aren’t weird.

My preferred flavour is Strawberry, with Sour Cherry a close second. It’s not as sweet as most commercially available yoghurts (which are generally stuffed with sugar because fat is demonised as the enemy – roll eyes) but that’s the way I like it. The various flavours are available in 150g and 450g pots and apparently also drink varieties, although I haven’t tried those. I buy strawberry Skyr every week, so another ‘success’ protein product.

The yoghurts are generally around 85p each. With 9.4g protein per 100g (14.1g in one pot of strawberry) vs 55p for a Yeo Valley Natural Yoghurt 150g with 5.1g protein, it works out good value for money. The yoghurts are super easy to consume with a piece of fruit for a mid afternoon high protein snack that’ll keep you full for ages.

Would I buy it again? I will and I do.

In my notes for this post, I wrote “delicious fatty bitches” about these peanut bars. Try as I might, I can’t think of a better way of describing them, so there you have it. There’s no getting round it: these “protein” bars are delicious (if nuts are your thing) but with 12g of fat per bar and only 10.2g protein, the ratio is way off for anyone looking to regularly supplement their protein intake without weight gain.

These are definitely reserved for the sweets, treats and yummy ‘cheats’ (urgh, whatever) section of my dietary intake. And at £2.89 for 4, which works out at approx 72p per 10.2g protein bar, I don’t think that’s a bad thing for my budget either.

Would I buy it again? Only if I’m feeling particularly snacky (and have the spare dosh)

So there we have it – my verdict on a variety of “high” protein foods. Let me know if you have any protein favourites that I should add to my ‘try’ list by leaving a comment below…

Posted on October 24th 2018 by Jem Turner in Nutrition with 1 comment so far.