I signed up for the Lake Vrynwy Half Marathon, celebrating its 30th birthday this year, after a conversation with a fellow website geek & runner Dave McCourt at Shropgeek’s Rebellion #15 back in May. I’d heard a lot about the race previously, and Dave confirmed that it was mostly flat and a good course for a PB. It fit in nicely with my “at least one race every month” plans, albeit on Gaz’s birthday weekend, eek! (I’ll make up for that one later.)

Having not long set a new half marathon personal best of 02:17:10 at Shrewsbury Half Marathon in June, which was a surprisingly hilly course, I had originally set my sights on completing under 2hrs 15 minutes to score a new PB. I figured I’d be able to shave a few minutes off with a flatter course without too many problems. However, spurred on by my positive experience smashing records at Ellesmere 10k, I decided to go crazy (but not really tell anyone) and aim for the mega goal: a 2 hour half marathon.

On the morning of the race I fuelled up with porridge, which I wasn’t able to finish because I’d got cracking trapped wind from a pre-race-day curry (poor planning Jem, seriously) but managed to get in a banana an hour or so before the race started. I was incredibly nervous during the 1.5hr drive from Broseley to Wales, at one point nearly having a panic attack because Gaz wasn’t sure if he’d taken the right turning! I spotted my tensely furrowed brow in the passenger door mirror and spent the rest of the journey distracting myself by practising relaxing my face so I didn’t look so bloody grumpy/terrified.

It started raining an hour before the start, which meant that when we finally arrived at designated field for car parking it was… interesting to say the least: mud and water flying everywhere, some cars struggling to even get on to the field. We managed to get into a spot and then followed a group of other runners from the field to the start area where I, as per usual, joined the looooong queue for the loo. I could pee 5 times en route to these things and would still need one last wee before the run itself.

Post-pee, warm jumper entrusted to the husband and onto the start line where I was squashed, trampled, elbowed, prodded, kicked, pushed and shoved into position. The start was utter chaos. Runners weren’t listening to requests to move back and there was no organisation to get people behind the start line. I was feeling WAY out of my comfort zone and in desperate need of some personal space by the time we finally set off, but it was a good mile in before I got any as runners elbowed each other as they jostled past, desperate to get in those famous PBs.

Start chaos aside, the rest of the run progressed smoothly. The course had a short incline to begin with but upon hitting the mile 1 marker it was flat or slight downhill for a significant portion of the rest of the race and I maintained what felt like a steady but reasonable pace.

I stuffed a packet of Squashies into my face around mile 4 in anticipation of it getting harder later on, but to no avail; around mile 7 I started to feel the legs getting heavy. I had managed to keep up with another lady who kept telling me she was going too fast and needed to slow down (but wasn’t actually slowing) and so we jogged on together for a little while, knowing we were probably going too fast but both apparently too stubborn to do anything about it.

At approx mile 8 my determination was in the toilet and I lessened off the pace which was enough for a few runners whom I’d passed early on to catch up with me. The runners, a chap from Dudley and his two buddies running alongside, were aiming for a 2hr finish time. The guy doing the pacing kept reeling off numbers: how far we’d come, how far we’d got left, average pace, how fast or slow we could run to get XYZ time. I found the thought of maths and figures a welcome distraction and attached myself to their little group, picking my legs back up to keep pace.

By mile 10 I was seriously tired. I kept thinking of how easy it would be to walk/jog/walk the final 3 miles and still get in within a respectable, PB busting time. The pull of a 2hr finish was strong now though, and the support from the little group I’d latched on to was constant. Some time between miles 11 and 12 we started talking about food: pork pies with lots of jelly, proper butter, carbs and chocolate and oh man, before I knew it the 13 mile marker was in sight and there’s only one thing left to do at that point: SPRINT.

I finished knowing I’d come in around 2 hours, and was over the bloody moon. It took all my willpower not to burst into tears as I caught Gaz’s hand on the final straight and over the line: adrenaline, pride, maybe both? I hung on to give my supporters a HUGE heartfelt thank you, including a big sweaty hug to the pacer, and then took one very stiff pained selfie: 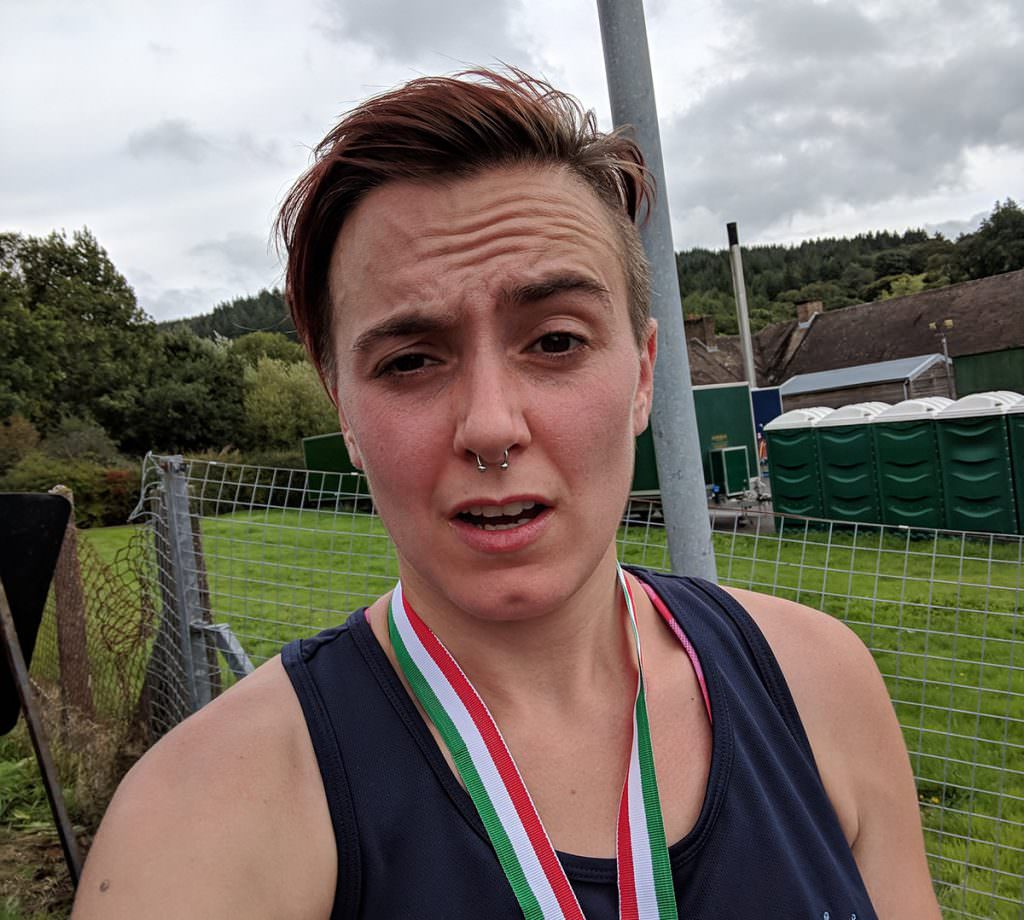 As we were coming in to finish the race, I was sure someone had shouted out to the man pacing as ‘Bob’, but I couldn’t be sure I’d not imagined that, and I’d totally forgotten what he’d actually introduced himself as because of ALL THE FEELS. Looking at the results afterwards (and doing a little Facebook stalking) I found his name was in fact Robert, which is obviously commonly shortened to Bob.

This would be completely irrelevant to most people, right? But it seemed so poignant that a Robert/Bob would pick me up around mile 8 when I’d struggled during Shrewsbury half marathon at more or less the same point, bursting into tears for my own Robert/Bob; my brother, who took his own life in 2017. I finished Shrewsbury crying, and dedicated the race to my brother as his memory got me through. I don’t believe in life after death, god, heaven and all that stuff, but I can’t help but take a breath at the spectacular coincidence that I would be helped to finish by another Bob at mile 8 (and cry accordingly).

My official finish time was 01:56:17, a massive 20 minutes and 53 seconds faster than my personal best set in June.

To the Bobs of this world ♥

5 comments on "Giving it Everything at Lake Vrynwy Half Marathon"

Posted on September 10th 2018 by Jem Turner in Running with 5 comments so far.

Better late than never I guess 🙃

When you try to take a subtle photo but get caught

Before / After. I didn't die doing Liverpool Rock