I officially finished my cut with Renaissance Periodization on Friday last week, ending it a few days short of the full 12 weeks (I had a weekend of gluttony planned). I ended the cut at roughly 143lbs, having started at 158lbs, giving a total of 15lbs loss. With an increase in all lifts except bench, and new personal bests running at 5km, 10km and half marathon distances, I think it’s impossible to categorise the 11 week experiment as anything but a success! Visually, the difference between start ‘me’ and end ‘me’ is huge: 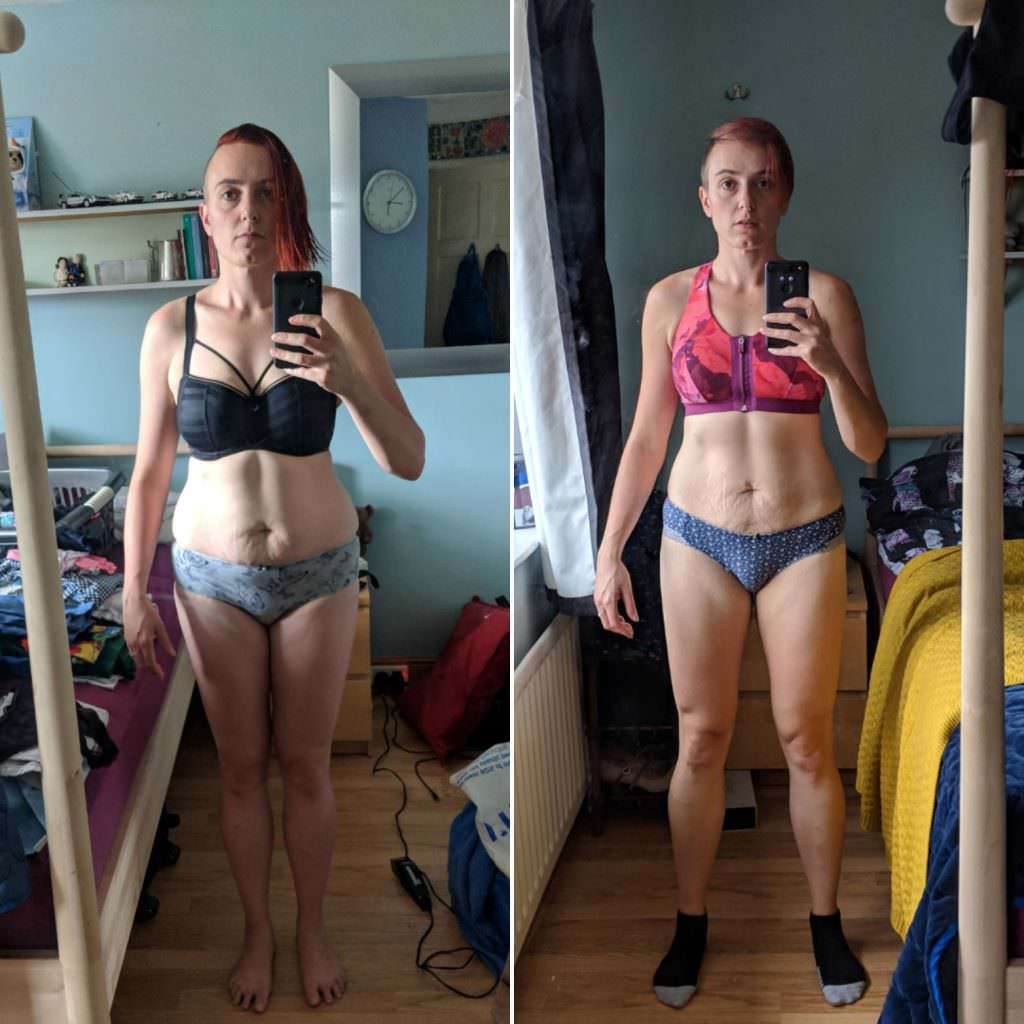 There’s obvious fat loss across the body and several areas where muscle growth is evident (especially my quads, but these have always been where I see THE GAINZ first).

I was a little bit worried about venturing into “cut” territory. Although I’ve guided myself through weight loss before, I find calorie counting tedious in the extreme and macro counting a bit of a brain-bending exercise. Further, I’ve not come across a diet plan – prior to purchasing the RP template – that was actually backed by science rather than nutritional myths. Any diet that has you cut out entire food groups is an instant no from me. My previous weight loss was also marred by dizziness and even a series of trips to A&E: don’t piss off your gallbladder, folks.

However, once I got into the swing of it, I found the template actually really easy to follow. The template itself is split into stages – base, fat loss 1, 2 and 3, and then various maintenance stages (where I’m at now). Each stage is broken down based on what time of day you work out (to maximise carb consumption when it’s needed) with macros for light, moderate and hard workouts, and then a set of macros for a non workout day. To make it easier to follow, I:

Some people also meal prep several days worth of food in advance, but I have the privilege of being able to cook ad hoc as I work from home, so didn’t see the point. I do make frequent use of leftovers though, so it’s not all extravagantly prepared and freshly cooked meals.

To maintain mental wellness throughout, I didn’t deny myself anything too drastic. I sometimes made choices that were questionable, like the time I ate most of a 278g bar of Cadbury’s Peanut Caramel Crisp in one sitting, or the time I ate 6 pieces of cheesecake “to test it”, but generally I was able to moderate cravings and be a sensible, responsible adult. Mostly.

With all that said, I am not the sort of person who can maintain 100% effort at this sort of thing irrelevant of my “hacks” and untracked cardio. In particular, I seemed to struggle from about week 8 to maintain the consistency of the earlier weeks. I don’t know whether the novelty had simply worn off, life circumstances were getting in the way or I’d been too complacent with easy early losses, but I would consider doing a shorter cut if I were to run this through again.

RP provided all the information I needed to follow the templates and complete the cut in PDFs alongside the diet and videos via their YouTube channel. In addition to this, there’s a Facebook support group, although it’s very USA-centric and lots of people ask the same questions again and again. Nothing out of the ordinary for a Facebook group, though.

Quite aside from the obvious goal of weight loss, I finally decided to go for an RP template because I was fed up of feeling dizzy and under-fuelled during workouts (and afterwards throughout the day). As it turns out, my biggest pre-cut problem was that I was simply not consuming anywhere near enough carbs. I was surprised by this, as I’ve never been carb-phobic, but with the all out war on carbs that seems to dominate the fitness industry it’s not surprising that I’d somehow inadvertently let this get to me. I entirely attribute the increase in my strength, endurance and performance to dramatically increasing my carb intake during my cut. If nothing else, I’m glad I bought into the RP hype train just to re-learn how to fuel my body.

Next step? Maintenance for the foreseeable future, and then perhaps a mini cut in the new year. We’ll see…

3 comments on "My First Cut: The Write-Up"

Posted on September 19th 2018 by Jem Turner in Nutrition with 3 comments so far.