After having taken part in the BTF British Taekwon-Do Championships in June of this year, I wasn’t sure if I’d compete again despite coming away with a bronze medal for patterns (Yul-Gok tul). Despite enjoying my twice weekly taekwon-do lessons, I found the experience of competing quite overwhelming; putting myself out there caused my anxiety symptoms to flare up, and when I froze on the mat during my second round and then burst into tears, I wasn’t sure I’d got the nerve for it.

Nonetheless, when the poster for the BTF Birmingham Open circulated, my husband encouraged me to compete again. In addition, one of my classmates said that she would if I did. Knowing I’d have moral support on the day, and that I’d regret it if I didn’t at least try, I agreed to enter.

Having entered the competition, I remained ambivalent during the run up and completely failed to practice the pattern I intended to perform (Yul-Gok again) until the very last minute. In the week before the comp, I had one of the worst PMDD cycles that I’ve had in months — in fact, all year — and I nearly pulled out at the last minute. The only things that stopped me were a) wanting to show my kids that sometimes we need to suck up our fears and do stuff that scares us, and b) feeling like the cost of entering would have been wasted (mostly this last one, I’m a cheap git).

We arrived early on the morning of the Open and after changing into our doboks, assisted with setting up the mats and last minute practising. This did nothing for my confidence, as during my practice runs I couldn’t successfully execute a single bending ready stance into middle side piercing kick (which I have to do twice). I’d either fail to properly drop into the bending ready stance, or would lose my footing as I moved, or indeed failed to rotate the standing foot during the kick which is integral to a successful side piercing kick (in allowing you to open up the hips to complete the movement, to prevent you falling and also because it just looks better).

Here’s an example of a decent side piercing kick (although higher than necessary for Yul-Gok) if you’re not familiar: 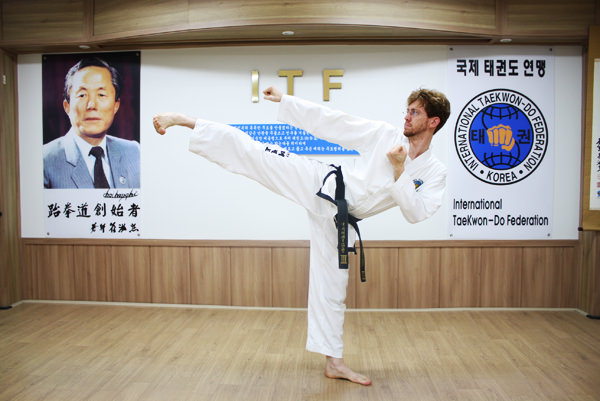 Anyway, I was kept distracted from my nerves for the most part by having to listen out in various directions for the kid’s calls to compete, as they were due up first. Sod’s law they were called at the same time, which meant sending Olly off with Gaz and me supporting Izzy. Both were within large groups and performed well but neither won medals this time round, although Izzy’s pattern (Dan-Gun tul) was really strong and only missed out by one vote, so she has definite promise to be a medal winner next time.

I was called up shortly after, and as soon as I stepped foot on the mat the nerves hit me like a ton of bricks. I have never had issues performing in public, so I don’t know what it is about TKD (and I’m the same with gradings) that affects me so much. I was very visibly shaking just providing my name to the judges!

I don’t actually remember much about performing my pattern, including the competitor I went up against, but I do remember slipping slightly for my bending ready stance and totally fumbling the start position for my high backfist, with the only saving grace being that it was performed in the opposite direction of the judges. Having somehow made it through the first round (can’t remember the vote, although it was obviously in my favour) I was offered a minute to calm down as round 2 would be straight away, but I opted to go straight into it and get it over with.

I performed Yul-Gok a second time and made an even bigger mess of the side piercing kick but — crucially — I recovered, which is ultimately where I failed at the last competition. The judges then requested my opposition and I perform Dan-Gun, which is the pattern the kids have been working on for 6 months so I knew back to front and inside out. Unfortunately my strong Dan-Gun wasn’t enough to combat my dodgy Yul-Gok and I lost in the second round to the lady who went on to win gold, leaving me with silver. 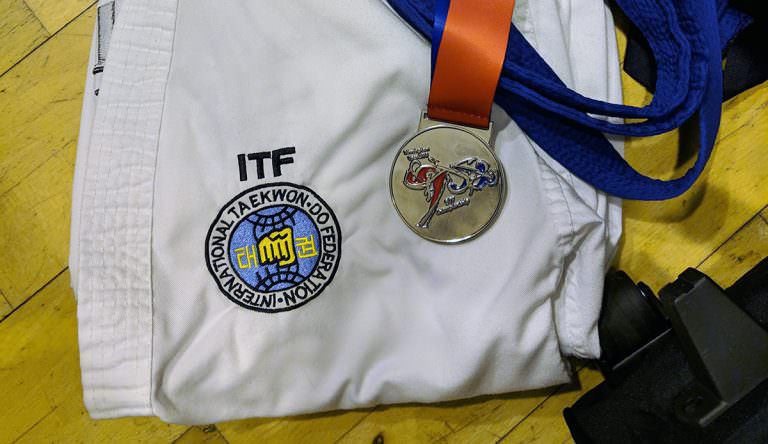 Considering my ambivalence for this comp, and my lack of practice, I was incredibly surprised to land a silver medal this time round and attribute it almost entirely to being in a smaller group. Bending ready stance/side piercing kick remains my nemesis, and deserves way more practice than I’m dedicating to it right now: something to work on going forwards.

In the next competition I hope to finally enter in sparring, so perhaps this time next year I’ll be discussing a strong sparring result, and who knows, maybe a new pattern win? Given the complexity of my next one though, I won’t hold my breath…

Posted on November 20th 2018 by Jem Turner in Martial Arts with 0 comments so far.