This is the next post in a series I started after realising recently that my apathy and laziness was causing weight gain and a relapse of my more severe PMDD symptoms. You can read the rest of the posts here, from oldest to newest:

After feeling like last week was an utter washout for steps (literally in some cases — we’ve had a LOT of rain) this week hasn’t fared much better. Yet again I’ve only managed to hit my target twice (although I’m doing ok today). 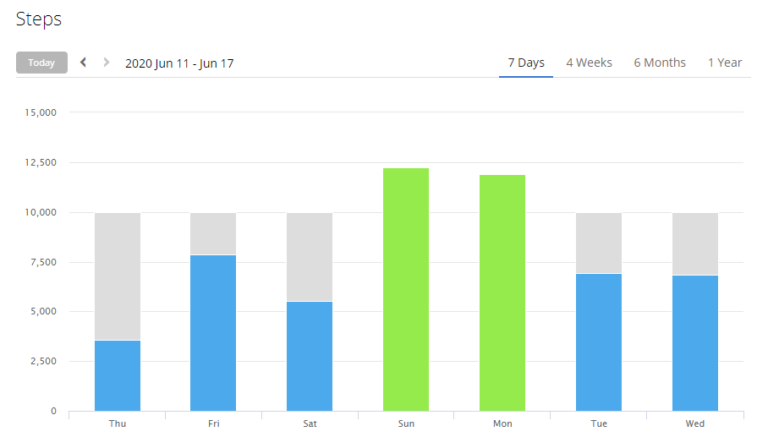 I don’t feel as bad about this as I did last week, and I think part of that is just because I’m in a good mood (always helps) but also because I’ve managed to reintroduce a run every other day. Not a huge one — we’re talking 1-2 miles a time here — but enough to get the legs moving and the heart rate up. I’m trying to get to the point where I’m comfortable knocking out a quick 3-4 mile run and then I’ll start working reintroducing a longer one each week. That’ll definitely help get my step count up, hah.

Although I have managed three sessions this week (including the usual PE and yoga), my Tuesday ‘session’ was following a dance video on YouTube with my daughter. It was only 20 minutes long and didn’t really have enough movement for my liking. I’m including it because I’ll miss this goal if I don’t, but in an ideal world I need something a bit more MEATY. Did manage a couple of ROMWOD sessions this week though, so that’s something.

Another two sessions of bench press (and related accessories) this week, as per last. Bench is progressing well after my lockdown break, which couldn’t be more pleasing given that it’s my weakest lift. I think this might be contributing to my general good mood.

I’ve still not managed to get under a barbell to squat, and am getting to the point where I’m working it up in my head which will likely put me off even trying. I am my own worst enemy sometimes.

I will add in another weights session this week.

Despite being in more or less the same position workouts-wise as last week, I’m infinitely more cheerful about it. I’m a little worried about getting too excited because I have a feeling this is the high that proceeds a low (oh, the corona+hormone wave) as per previous months, but it could also be that the running is helping my head; it wouldn’t be the first time.

My weight is currently holding steady at about 73kg. I have nothing exciting to say about this – it is what it is.

I am determined to report back in week 5 having met all three goals. Watch this space…

Posted on June 17th 2020 by Jem Turner in Health, Running, Weight Lifting with 0 comments so far.